Tis the season for apples!

If I had to pick one season, I would have to say that Fall is definitely my favorite time of year.  The smell of the cool, crisp air, the sight of the leaves changing color, the warmth of my favorite sweater and, last but certainly not least, the taste of the harvest produce making its way to the farmers market.

Although it’s still early in the season for a lot of the fall produce, it just happens to be peak season for apples.  So, in celebration of my favorite season AND my favorite fruit, today’s article is all about apples!

Growing up in the Midwest, apple picking was a tradition in my family.  Every year my parents would load us into our big old station wagon and we would head out to Bell Apple Orchard.  Now I would love to tell you that I have all of these wonderful memories of walking through the orchard eating freshly picked apples but the truth is my favorite part about apple picking happened after we picked the apples.  That’s when we would stop by the farm stand for THE MOST AMAZING warm apple cider doughnuts.  Oh my gosh……BEST THING EVER!!  (wow….I so want an apple cider donut right now….lol).

As much as I would love to keep reminiscing about those donuts, today is all about apples which, by the way, just happen to be one of the most well known and widely consumed fruits in the world.  And for good reason.  Not only are they delicious, they’re easy to eat, relatively inexpensive and you can find them in almost every grocery store and market.

Apples have quite the history, though.  Did you know that the apple tree, which originated in the mountains of Central Asia, is one of the oldest fruit trees in existence?  Some say it dates back as far as 6500 B.C.  It’s crazy to think apples have been around that long but then again there is the Adam and Eve story so I guess they have been around a long time!

Apples were eventually brought to North America by European colonists in the 17th century and they have been a staple in our diet ever since.

One of the greatest legends in the history of apples has to be the story of Johnny Appleseed.  Honestly, I knew nothing about this man prior to writing this article but quickly found out he was quite the character.

His life as an apple farmer began by collecting apple seeds from cider mills and using those seeds to plant trees.  For forty years, Johnny Appleseed traveled throughout Ohio, Indiana, Illinois and Iowa planting seeds wherever he went.

The trees from these seeds produced a variety of apples but they were bitter and often inedible.  As luck would have it, this made them ideal for producing hard cider and applejack.  In fact, up until Prohibition, apples were less likely to be eaten and more likely to end up in cider barrels.  Cider became so prevalent that it not only took the place of beer and wine, but it was often preferred over coffee, tea and even water.  No wonder everyone was so happy back then!

Today, there are 1000’s of varieties of apples grown commercially in the United States and, although hard cider seems to be making a comeback, apples are largely enjoyed for their taste and their health benefits.

The five most popular varieties of apples are Red Delicious, Golden Delicious, Granny Smith, Gala and Fuji.  I have my favorites but I am particularly fond of a locally grown apple called the Anna apple.  It is similar to a golden delicious only so much better.  My friend Stan has a tree and, lucky for me, he keeps me stocked up. 🙂

Although the nutrition of apples can vary greatly between the different varieties, studies have shown that apples have powerful health benefits.  They are high in fiber, antioxidants, phytochemicals and Vitamin C.  Apples contain zero fat, no cholesterol and they are relatively low in calories.  As part of a healthy diet, apples can help protect against serious diseases like heart disease, diabetes and cancer.  I guess it’s true what they say…..an apple a day can keep the doctor away!

When it comes to buying apples, you definitely want to spend the extra money and buy organic.  Research has shown that apples have the highest number of pesticides which is why every year they land on the Environmental Working Group’s Dirty Dozen list.

You may have heard that apple seeds contain cyanide but it’s not as scary as it sounds.  Although the seeds do have chemicals that can turn into cyanide in your body, you would have to consume at least 150 seeds to be at risk for cyanide poisoning.  That’s a lot of seeds not too mention imagine the stomach ache you would have after eating all those seeds!  If you are worried at all about the seeds, simply cut around the core and toss it.  Problem solved!

One risk you may not be aware of is that apple juice can interact with the allergy drug Allegra.  It appears the juice can make it difficult for your body to absorb the medicine so you may want to take this into consideration if you are taking this medication.

Well, I think that’s all I got for you so I’ll send you on your way to go get some apples.  And if you happen to find those apple cider doughnuts anywhere, let me know….they’re the apple of my eye 😉 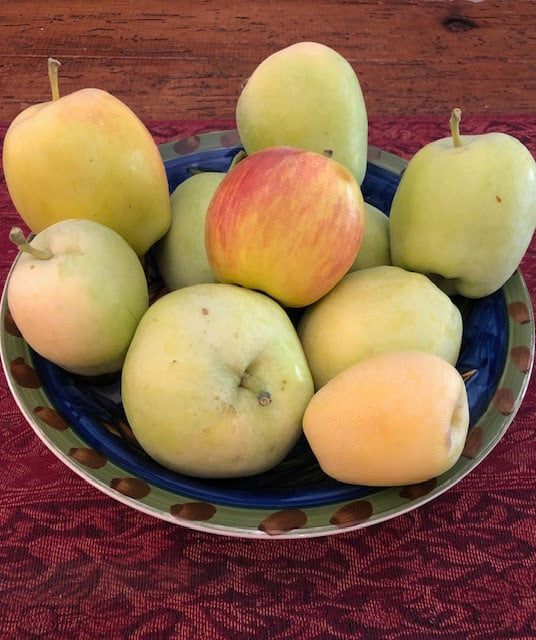