I love, love, love cinnamon.  Even as a kid, I loved cinnamon.  In fact, one of my all time favorite comfort foods when I was growing up was warm toast with melted butter and lots (I mean lots) of cinnamon and sugar sprinkled on top.  The cinnamon/sugar combo would melt into the butter and, oh my gosh……it was soooo good!

Back then I had no idea about the benefits of cinnamon, I just knew it made me happy!   Or maybe it was all that sugar that made me happy??   Either way it was good stuff!

Long before I was enjoying my “happy” toast, cinnamon was making quite a name for itself.  In fact, you might be surprised to know that it wasn’t always used as a spice for cooking.

For example, did you know that the Egyptians used cinnamon as an embalming agent?  Or that the Romans would burn cinnamon as an incense during funerals?  Who knew, right?

There was even a time when cinnamon was used as a form of currency in trade agreements.  It was such a prized possession that it was often considered more valuable than gold and ivory!

The botanical name for “true” cinnamon is Cinnamomum Zeylanicum which translates to fragrant spice plant.  Cinnamon comes from a bushy evergreen tree that is native to Sri Lanka but also grows in Indonesia, Bangladesh, India and China.  The spice as we know it is harvested from the bark and, once the bark has dried, you are left with “quills” aka cinnamon sticks.

There are a few different names and types of cinnamon depending on where it is harvested but the two that you will most likely come across are Ceylon also known as “true” cinnamon and Cassia which is a more modern form of cinnamon.  Ceylon comes from Ceylon in Sri Lanka and Cassia cinnamon comes from the cassia tree which is native to China.

I prefer the Ceylon cinnamon because it has a sweeter, more refined taste.  Ceylon cinnamon is a bit more expensive than Cassia but, in my humble opinion, definitely worth the extra money.

As with other spices in your pantry, cinnamon boasts some pretty impressive health benefits.  The compounds in cinnamon make it a powerful antioxidant which adds to its anti-inflammatory, anti-microbial and immune boosting qualities.

In Ayurveda, cinnamon is considered a warming spice and is used to enhance digestion, boost circulation and improve the absorption of other nutrients.

The biggest claim to fame for cinnamon is its ability to balance blood sugar.  Two teaspoons of cinnamon can decrease your blood sugar by as much as 20%.  When your blood sugar stays balanced you will likely have less cravings, better energy and you’ll be able to easily maintain a stable body weight.

With the abundance of sweet treats during the holidays, an extra dose of cinnamon could be exactly what you need to keep you balanced and going strong. 😉

One of the things I love about cinnamon is its versatility.  It can be used in both sweet and savory dishes which means it’s super easy to incorporate into just about anything you’re eating or drinking.  Try adding cinnamon to your coffee, or sprinkle some on your oatmeal, yogurt or your favorite nut butter.  Cinnamon pairs well with roasted vegetables and grilled fruit and it even makes a great addition to a pot of soup or some spicy chili.  Get creative and have fun because truly the sky’s the limit when it comes to this versatile spice.

I use cinnamon every chance I get and lately that means starting my day with a cup of chai tea.  The recipe below is from my ayurvedic mentor, John Immel, (http://joyfulbelly.com) and I think it’s one of the best ones I’ve tried.  Of course you can always buy a chai tea blend at the store, but why not save yourself a trip to the store and make it yourself?  Once you gather all the spices, you can whip this up in no time!

If tea is not your thing and you’re looking for a drink to spice up your holidays, John has a wonderful recipe for mulled spiced wine.  It has lots of cinnamon along with lemons, oranges and other seasonal spices.  Of course, you can easily make a non-alcoholic version of this recipe simply by using cranberry, grape or pomegranate juice instead of wine.  I tried the recipe with pomegranate juice and thought it was pretty tasty.  I also added cinnamon sticks for an extra kick of cinnamon.

So whether you’re cooking up a storm in the kitchen or settling down with a nice cup of tea (or wine), make sure to add lots of cinnamon because it really does make everything nice!

Blend all of the spices in a coffee grinder.  Place a 1/4 tsp. of the spice mixture in a cup, add boiling water, cover and steep for 3-5 minutes.  You can strain the tea before drinking but I usually leave the spices in the cup and drink them at the end. 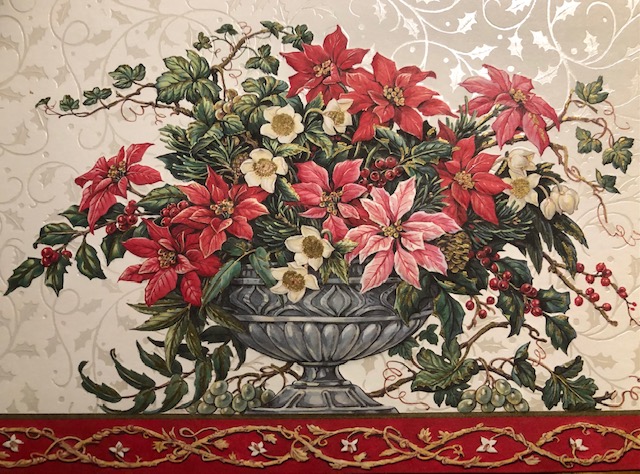