Are You Dreaming of Sugar-Plums?

Recently, I did something that I have not done in a very long time.  I read Twas the Night Before Christmas!

Reading each line made me feel like a kid again and I could quickly see why this is one of the most beloved poems of the holiday season.  Every word creates the most magical images of Santa and his reindeer delivering presents on Christmas Eve.

As much as I loved reading this poem, there was one line that gave me a bit of pause….

“the children were nestled all snug in their beds, while visions of sugar-plums danced in their heads.”

For as many times as I’ve heard that line, I never thought twice about those dancing sugar-plums but now I was suddenly curious.

I realized I had absolutely no idea what a sugar-plum is!

I just assumed a sugar-plum is a plum coated in sugar, but it turns out that’s not at all what they are.

According to candy historians (yep, there is such a thing), a sugar-plum is a comfit – a mixture of dried fruit, nuts and spices rolled into balls and then coated in sugar.  Except for that coating of sugar, these would actually be a pretty healthy snack!

And then it hit me……I have a recipe that I think would make the perfect sugar-plums!

My “sugar-plum” recipe has nuts, dried fruit, spices AND chocolate but luckily, they’re not coated in sugar.  The recipe is really easy to put together and you can customize the ingredients to whatever nuts, dried fruit and spices you like.

So if you want to feel like a kid again, you must read Twas the Night Before Christmas.  And while you’re at it, make yourself a batch of my “sugar-plums” – you never know when those visions of sugar-plums will start dancing in your head!

*Grind walnuts and dates in a food processor until crumbly.
*Add cacao powder and cinnamon and mix well.
*Add almond butter and process until well combined.
*Roll spoonfuls of the mixture into balls and refrigerate at least two hours. 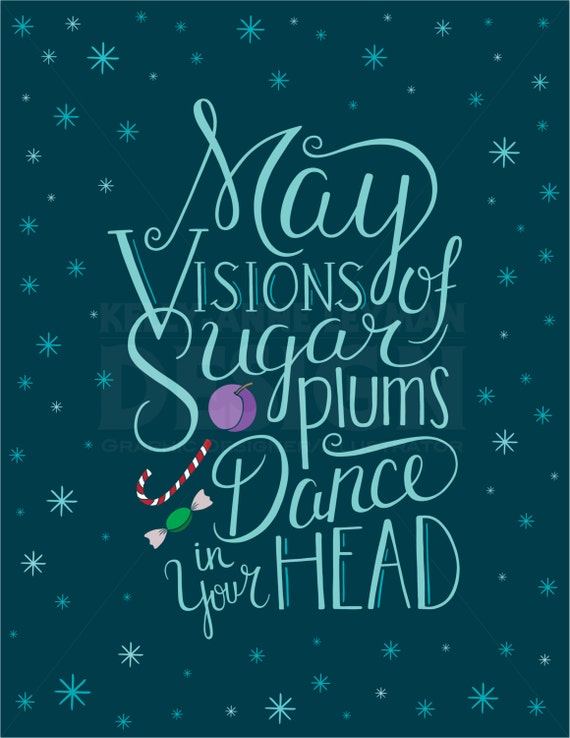